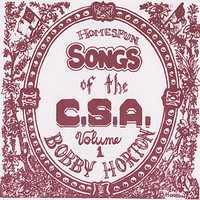 Way back in 1984, I was working on music for a movie that was set in Southern Indiana in 1863. The characters were worried about a potential raid by General John Hunt Morgan. With the blessing of Milton Bagby, the producer, I began looking for "period" melodies to use in the film.

Though I had been studying The War since I was nine years of age (1960), I had no idea of the importance of music to Americans during The War Between the States. In one afternoon at The Southern History Room of The Birmingham Public Library I found at least 100 songs from the "period". This prompted a study of tunes our ancestors leaned-on to get through that horrible war. I then performed a program of Southern wartime tunes for my SCV camp and decided to record some of these "hits" that I had uncovered. One thing led to another, and I finally released this recording (originally on cassette tape).

I played all the instruments, sang all the vocals, hand drew the cover and liner notes, and recorded here in home (originally on a TEAC 3340 four-track analog recorder) and later re-recorded on a Fostex 8-track analog machine -- hence the name "Homespun" in the title.