Homespun Songs of the Patriots 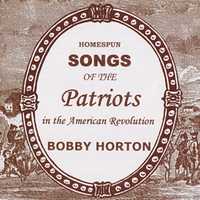 The founding of this country is one of the most amazing events in all of history. The colonists began the process in the 1760’s, declared their independence from England in 1776, and defeated the world’s most powerful army and navy over a period of eight years.

Presented here are songs that were sung and played by these brave, dedicated people. The tunes are presented in chronological order beginning with songs written to motivate the population to support the independence movement; songs to celebrate victories and thereby bolster morale; songs to "make fun of " the enemy; and "pop" tunes that were enjoyed by the common folk.

Like all my other recordings, I did the arrangements, played the instruments, sang all the vocal lines, and recorded & mastered here in my home production studio using TASCAM DA-88 digital recorders – hence the "Homespun" in the title.